“Racist!” The Politics of Labeling

‘Racist’ is a word getting liberal play these days, as in, “Anyone who voted for Donald Trump must be a racist.” The accusation rarely gets more specific, as if needing no explanation, shorthand for being bad, sick, flawed, mean and hateful, stained by the nation’s founding sin and original shame. One of those. No wonder people get upset.

I am not among the accusers, mostly because I think trying to sort people into racist or not is a bad idea, in no small part because it assumes there is such a thing as a ‘racist person,’ that human beings can really be that simple, not to mention the sixty-two million who voted for Donald Trump.

Calling people racist is also a bad idea because it draws attention away from the racist consequences of what all kinds of people do, and it polarizes us into hostile camps of accusers and accused, encouraging smug self-satisfaction at the moment of pointing the finger, especially among whites, with the implicit, self-congratulating assurance of being good and pure and thereby off the hook.

And when it comes to how people vote, there is the problem of kidding ourselves that we can tell from that what they think and feel, not to mention who and what they are.

What, for example, can you tell from the fact that I voted for Hillary Clinton? Does it mean that I, like the candidate I voted for, have a fondness for financiers and wealth and the capitalist system that makes them possible? Do I identify with billionaires pouring millions into the Clinton campaign? Am I secretive with a somewhat dodgy relation to the truth? Do I embrace the arrogance of power and upper-class entitlement to decide for others how life will be? Do I appear to be progressive—in favor of raising the minimum wage, for example—but can be counted on to support the capitalist system that makes that wage such a desperate issue for so many?

I am none of that, and yet she got my vote.

A vote is not a window to the soul. Yes, there were Trump voters who cheered his racist, sexist views, but there were many others who gave their vote in spite of that, including, I imagine, some of the one-out-of-four who told exit interviewers they had just voted for a man they believed unfit. Just as many Clinton voters cast their ballot while holding their nose.

These are the millions of reluctant, conflicted voters who said they weren’t voting for the parts they didn’t like or couldn’t stomach, but for this other reason or that. It isn’t what he says, but how he says it, the way he speaks his mind, regardless of what’s in it at the moment. Or what he promises to do about the economy. Or his ideology, not his personality. Or that he simply isn’t her. But grabbing women’s genitals or banning a whole religion? No, we didn’t vote for that.

But we can no more vote for part of a candidate than we can vote for one hand but not the other. And the problem is our connection to that other hand.

In other words, no matter what we tell ourselves about why we voted as we did, the outcome is the same. To vote for a candidate is to consent to their election, the parts we like and the parts we don’t, because it is the whole human being who receives our vote and occupies the office and has access to its power. Hold your nose or give a cheer, it makes no difference. Consent is consent, and it has consequences.

Insofar as electing Donald Trump has the effect of legitimating and empowering someone who espouses racist views and supports white privilege and supremacy, then a vote for Trump is an act with racist consequences regardless of what the voter may believe or want.

Yes, the vote is not only that, but includes it, because we cannot wall off our behavior and our reasons for it from the result. Voting for Trump while disapproving of his misogynist and racist displays does not remove responsibility for helping to elect a man who holds those views and might reasonably be expected to act on them and empower others who will.

The same, of course, can be said about my vote for Clinton, by which I consented to all kinds of things I don’t believe in, beginning with the election of yet another liberal caretaker of the status quo. A president who can be counted on to protect capitalism and the elites whose interests have driven the oppression of people of color—not to mention white working people—for hundreds of years. A commander in chief prepared to use violence to protect ‘American interests’ that put corporations and the ruling class above everyone else. Another liberal who will not confront the reality of mass incarceration and segregation and the deliberate impoverishment and degradation of neighborhoods and communities of color, including Native American reservations; or challenge the ideal of manhood that drives men’s violence; or the Western mantra of progress and growth that is driving millions of species, including our own, toward extinction. Who may care about such things more than the other side, but allows them to continue nonetheless.

None of these are my reasons for voting as I did. I voted in spite of them, as did millions of others. But the consequences are the same.

And so, here we are, walking contradictions, which is why we can be so quick to feel bad for ourselves, to be caught in such a trap. And we are caught, we have always been caught, we were born to it, and the sooner we see the reality of that, the better.

We live in a society in which racism, sexism, and class oppression have been institutionalized and normalized for hundreds of years. This is the status quo, and to perpetuate that is what politicians are supposed to do. And the rest of us are expected to vote for them, if only to affirm our belief in democracy, even if it means choosing the lesser of two evils.

Instead of looking for someone to blame, we need to pay attention to how we all acquiesce and consent to the way things are, all the while telling ourselves we are not responsible, not being one of those people who make bad things happen. Because we have met those people, and they are us.

Are Trump voters racist? I don’t know and I don’t care. It’s the wrong question. It’s one more invitation to indulge the American obsession with otherness, with shame and guilt, wickedness and sin, with punishment, penitence, and revenge. All of which changes nothing, as tens of millions of people continue to suffer the consequences of living in a society organized to promote inequality, privilege, and oppression.

What I do care about is understanding how we can withdraw consent in ways that matter more than complaining and calling people names. We have been trained to have no idea of this, which is why we need models of what is possible. Such as the action at the Standing Rock Sioux Reservation to stop the Dakota oil pipeline from crossing the Missouri River. 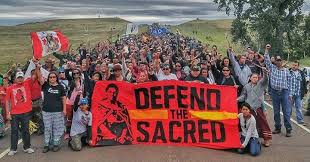 For months the resistance refused consent by occupying land the pipeline would cross to get to the river. They came together, prayed, counciled, organized, went to court, lobbied investors to divest, and, above all, with their bodies and their voices, they stood together and said no. No, you may not destroy the water or the land to which we belong. You may not profit from the destruction of people and the earth. You do not have the right to do whatever you want, whatever you have the money to pay for, whatever you can manipulate the law to allow and justify. What you are doing is wrong, and we do not consent, which you know because we are here.

One of things revealed at Standing Rock is what we have in common—that we are human beings, and citizens, and creatures of earth and water and air, without which none of us can survive. We are all in the same boat and always have been, the deplorables and the adorables, and we all have reason to feel vulnerable and afraid. And, in one way or another, we are complicit in our consent to the status quo.

But we will not discover that until we open our minds and hearts to the complexity of other people’s lives, until we stop judging them by standards we spare ourselves, and until we have compassion for the common struggle to live as full human beings in difficult times.

“The Racism of Good White People”
“What Is a System of Privilege?”
“What Are We Afraid of?”
“National Disobedience Day”

8 responses to ““Racist!” The Politics of Labeling”

To leave a comment, please use the space below. Cancel reply

Or use the RSS feed.

Photos of Allan Johnson by