It’s Not about You

One of these days I’m going to have a bumper sticker that reads, It’s not about you.

I don’t know why, exactly, it keeps coming into my mind. It could be just a note to myself, but, then, of course, it would be just about me.

I’ve also been wondering if it’s an accident that the country that made individualism a sacred principle, also invented solitary confinement as a form of punishment.

I find that when two things present themselves like that, one after the other, they’re often connected, which is what Roxie and I are down here this morning to figure out. 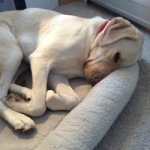 I should note that she can appear to be sleeping when she’s not. This is work, and yet she has an uncanny way of maximizing her efficiency by making rest and labor simultaneous. She reminds me of those ducks I read about who can put half their brains to sleep while the other half is wide awake.

But enough about her.

I want the sticker because it seems that everywhere everything is all about you, the universal me—your me, my me, their me—which wouldn’t be a problem, if everything was about me and you, which, in case it needs to be said, it is not.

I might mention, for example, the global pandemic of men’s violence against women, and there will always be a man protesting in an injured tone that he’s never raped anyone.

Okay, I say, well done. But so what? I wasn’t talking about you.

Which he doesn’t grasp because he cannot see past himself, as if something can involve him only if it’s about him. The curse of individualism. And the refuge.

Like the white person so earnest about not wanting to be seen as racist that it can be easy for a person of color to feel invisible in their presence. Because, in the thick of that white preoccupation, what racism does to other people’s lives is not the point.

Which is why a black friend of mine once said that the most useless thing she could think of was a white person feeling guilty, because guilt can so easily take us to that place where it’s all about me and how I feel about what I’ve done or failed to do.

My effect on you is reduced to an occasion for my own feelings, which, come to think of it, might give me reason to reconsider whether I really hurt you after all, or how much, or was it really necessary to make so big a deal of it, considering how bad you’ve made me feel.

Teenagers can be especially artful in this, countering your complaint by resenting you for making them feel bad because of what they did. If only you’d been good enough to keep it to yourself.

And who knows, maybe you even had it coming.

How making it all about you can make it not about you at all.

I’m surprised there aren’t places where you can sign up for lessons. Then again, maybe we’re automatically enrolled the moment we’re born.

By which I don’t mean just men and whites, this being a general product of our cultural madness for the individual. It’s just that systems of privilege give dominant groups more opportunity to put it to use, including those who are sincere in wanting to make a difference.

I’m recalling a group where a conversation about race turned to the subject of hope, and I said something about not believing in that, it being too close to despair. What I do believe in is faith, by which I mean our capacity to not be afraid, to not become the fear that would keep us from what needs to be done.

What I remember most is the silence that followed and the very different reaction of whites and blacks in the room, with black people nodding in agreement as they looked about, and white people staring down at the table and shaking their heads.

I don’t know what they were thinking, because I didn’t ask, not knowing them well enough and too taken by what I saw. But I have a hunch about what was going on.

Hope and despair are for quiet moments of solitary reflection when you’re free to wonder about the meaning of it all. Like depression, despair is a private thing that does not seek company, as in the middle of the night when you’re feeling helpless, that there is nothing you can do that will make a difference you can see.

Out of the darkness, hope appears as an antidote, but suited more to the feeling than the problem, for it does not so much galvanize as soothe. Hope comes riding to the rescue, its banner whipping in the wind, promising to lift our hearts, that things will work out, somehow, someday, against the odds.

Whether we do anything or not.

Which can make hope into a luxury, a refuge from despair, that does not hold us to account.

But faith is what comes of having to wrestle with the angel of fear, whose power faith would harness into action. Faith is what turns a crowd of individuals into a march and then a movement. Where hope is passive and content, faith has an agenda and makes demands.

I suspect that people of color cannot afford to spend themselves on hope, because oppression is too immediate, every day, and has forced them to pull together, to find strength in solidarity built on faith. Because they know that in the moment of confronting power, the kind that hurts and even kills, the choice is not between hope and despair, but faith and fear.

White people have the luxury of being able to watch from the sidelines, or to know that at any moment, they can withdraw to the relative safety of being white. And hope it will turn out okay.

In other words, for people of color, racism is more a matter of we and us, while for whites, sliding down that slippery slope, it’s more likely to be all about me, or not at all.

Which brings me, oddly, to solitary confinement, first introduced as a form of punishment almost two hundred years ago in Philadelphia, famous for the Declaration of Independence and the Liberty Bell. If ever there was a place devoted to the principle that it’s all about you, it would have to be one of those tiny cells, little bigger than a closet, where prisoners may be confined for years or even decades.

Why, I wonder, has it taken so long to consider how barbaric and inhuman this is and, even now, with arguments on either side? I have a hunch that such punishment has persisted because it is seen as a natural extension of what we’ve been taught is the normal condition of a human being.

After all, if it’s all about you, what else is there? And how much room does it require?

Which sounds to me like the loneliest, most desolate place there is, the modern self, a tiny cell just big enough for me. And yet, we are supposedly the point of it all, not together, but separate—the you and the I—and this singularity is what it’s all about, the reason to exist, to be celebrated and defended at all costs, the freedom to be lonely, imprisoned by the illusion that a single human being could possibly be enough to make a life.

We are snookering ourselves into hell.

For in the moment that I make it all about me, I make you invisible, and turn myself into a ghost.

Which is not what it is to be a human being, which I know from how it makes us crazy.

Crazy in the prison cell, crazy in the frantic pace of the ‘individual’ life racing around so as not to pause long enough to see the emptiness we have become. Crazy in all the desperate measures to deny our embeddedness in other people’s lives, to escape the loneliness and insufficiency of self, with drugs and alcohol, compulsive sex, the sculpted body, the endless text, the 70-hour week, the next thing to buy. Does it not occur to us how pervasive it is, the desire to escape, to be anywhere but here, trapped inside the fiction that who we are goes no further than our skin?

Roxie looks at me, puzzled that anyone would choose to be this way. It is so simple, so obvious, and yet, why so hard, to see through the paradox that I am not the point, even of myself.

I remind her that she is a pack animal, which makes her the Queen of knowing it’s not about her, not that she won’t occasionally blow me off when I call. Still, there is always the moment when she turns and comes running, as if that’s what she had in mind all along.

Or I look up from my thoughts to see her standing off in the woods, still, intent, as she looks at me, always knowing exactly where we are.

We think we are not pack animals, the human beings, making it easy to imagine that I stand alone, autonomous and independent, when I do not. To think that what happens to you does not happen to me, that my life is a simple function of who I am, as if there were such a thing, separate and complete, that there is nothing larger than myself connecting my life and yours, that my end of the boat can sink while yours does not.

Every indigenous people has known what our ‘civilization’ would have us deny and forget, and then tell ourselves we are superior for having forgotten, which may be why we have worked so hard to make them disappear.

It’s not about you.

Uncategorized despair, faith, hope, individualism, not about you
← Hijacking the Middle Class The Spiritual Politics of Roadkill →

4 responses to “It’s Not about You”

To leave a comment, please use the space below. Cancel reply

Or use the RSS feed.

Photos of Allan Johnson by